Madison – Balch Crossing is our 2nd location in Madison, AL. It is located across the highway (US 72 West) from Madison Hospital and very close to the new Clift Farm mixed use development. This location, along with our Madison – Hughes Road South clinic, ensures residents across the Madison metroplex have access to a convenient J&H facility.

Selea Cooper, from Madison, AL, joined the Johnson & Hayes team in June 2019. Selea always wanted to pursue a career in healthcare. Once in high school, Selea participated in a program where she observed various healthcare professions. It was in this program that she discovered her passion for becoming a physical therapist. Selea received her Bachelor’s degree in Exercise and Sport Science from the University of Alabama and her Doctorate of Physical Therapy from the University of South Alabama. Selea shadowed at Johnson & Hayes one summer as an undergraduate student. She also had one of her clinical rotations at J&H. Selea enjoyed the overall environment of J&H and the ability to make meaningful connections with patients. In her free time, Selea enjoys watching Alabama football games, reading, going for walks with her rescue dog (Sugar), and spending time with family and friends.

Kendall’s roots are in Knoxville, TN but also claims Huntsville as her home since moving here in 2012 to begin her collegiate volleyball career at the University of Alabama in Huntsville. At UAH, she earned her Bachelor’s in Biological Sciences with an Exercise Physiology cognate. Prior to college, Kendall developed a passion for Physical Therapy through personal experience and shadowing opportunities of various patient populations. It was early she developed a strong drive and passion for patients with neurological disorders affecting mobility and balance. Kendall was accepted into Belmont University’s DPT program where she graduated from in August of 2019 and got married one week later! It only took an 8-week clinical rotation in 2018 for her to know J&H was a special place. In October of 2019, Kendall accepted a position in the Dizziness and Balance program to assist the very patients she is most passionate about. She believes Physical Therapy is a valuable tool to help those with mobility disorders regain an active lifestyle and improve quality of life through movement and community. Outside of work, Kendall enjoys practicing Pilates, hiking, being on the lake, playing volleyball, and spending time with her husband, Conner, family and friends. 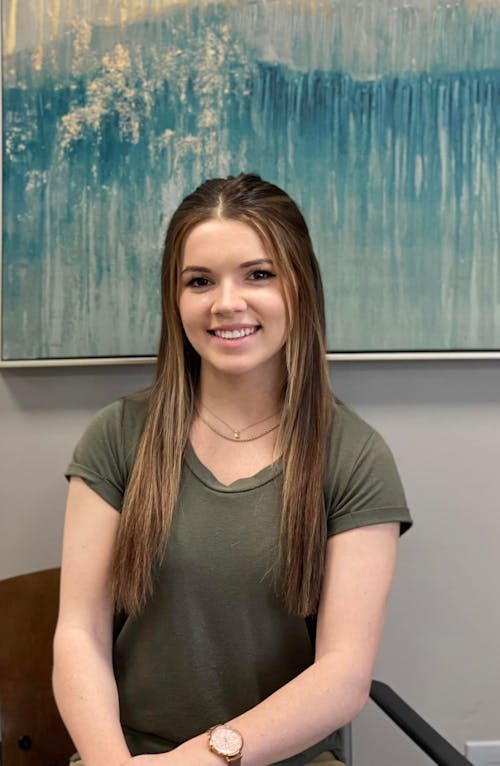 I grew up in the small town of Elkmont, Al and shortly after graduating in 2016 I moved to Madison, Al. I wasn't completely sure what career I wanted to pursue, thinking I may be interested in personal training due to my background in fitness and nutrition. When I took my first anatomy class, I absolutely fell in love with the body and wanted to expand my knowledge even further, so I applied and was accepted into the PTA program at Calhoun Community College. I graduated with my Associate's degree and became a licensed PTA in May 2021.

I have worked at many different types of settings, such as pediatrics, outpatient orthopedic, and a balance oriented clinic. I determined with further training, I had the most passion for patients with balance disorders and dizziness, but also have a love for orthopedics.

I heard about an opening at Johnson and Hayes through an employee, and after hearing all of the amazing reviews from patients and employees, it was an opportunity I couldn't turn down. I am now able to focus balance and dizziness patients one-on-one, which I absolutely love and have always wanted.

Outside of work, I love doing anything outdoors, especially hiking or traveling to new places, going to the gym, and spending time with my two fur-babies! Megan Miller, a native of Huntsville, joined Johnson and Hayes Physical Therapists in 2012 because of the compassionate and friendly staff she met, and the "small town" feel when patients entered the clinic. Through school and internships, she found that patient-focused care rendered the best outcomes and desired to work in a PT-owned clinic that allowed PTs to treat their patients through their full recovery. Growing up, Megan enjoyed helping others and found Human Anatomy and Physiology to be her favorite High school class. A career in Physical therapy has allowed her to pair these two together, with each patient presenting unique problems that keep her on her toes.

Megan graduated from UA Huntsville with a Bachelors in Biological Sciences with an Exercise Physiology Minor. She earned her Doctorate in Physical Therapy from the University of St. Augustine after graduating with High honors. Since 2012, Megan has completed continuing education towards earning a Manual Therapy certification. Beginning in 2015, Megan began her training through the University of St Augustine in Craniofacial Physical Therapy after finding that there was a lack of care in North Alabama for patients suffering from jaw and facial dysfunction. In her spare time, Megan enjoys traveling, cheering on her Vols/Packers/Predators/Trash Pandas, and spending time with her husband Larry, and kids- Callie and Landon.

Mary Emily grew up in Muscle Shoals, AL and joined the J&H team in September 2021. She attended Auburn University for her undergraduate degree in Exercise Science and minored in Psychology. She then moved with her husband, Austin, to Chattanooga, TN, where she attended the University of Tennessee at Chattanooga and received her Doctorate of Physical Therapy degree. Mary Emily grew up playing high school sports and enjoyed learning about the human body in her anatomy and physiology classes. She always had a passion for serving others and loves the ability to help people of all ages regain mobility and functionality to improve their quality of life. One of her favorite aspects of her career is having the ability to build relationships and rapport with her patients. In her free time, Mary Emily enjoys spending time with her husband, friends, and family. She also enjoys cooking, eating good food, spending time on the lake, and taking her two dogs, Sammie and Copper, on walks. I graduated in May of 2022 with my Doctorate from the University of Evansville in southern Indiana.

I grew up in Collinsville, IL which is right next to Saint Louis, Missouri. Being so close to the city, I grew up loving Cardinals baseball. I also love traveling, going on walks, good food, and exploring my new home in Alabama!

My favorite part of physical therapy is being able to drastically improve someone's functional mobility and quality of life. Getting to build trusting relationships with my patients throughout the progression of their treatment is very important to me. My love of helping others and my interests in anatomy & physiology combined to make me love physical therapy. While I was in PT school I participated in my school's student-run, pro-bono physical therapy clinic. Being able to learn and practice my skills while also providing care to an underserved population in my community was one of my favorite parts of being in PT school.

I am certified in LSVT BIG which is a program focused on restoring quality of movements in individuals with Parkinson's disease and other neurologic conditions. I am excited to start my career treating individuals with dizziness and balance difficulties, as well as orthopedic conditions!